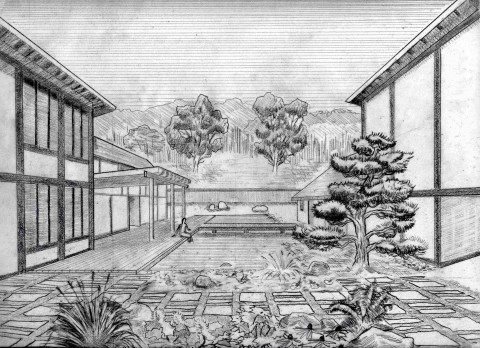 An early conceptual sketch of the courtyard 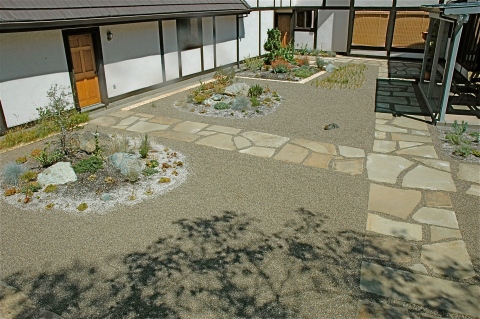 the courtyard with planting islands and local bird’s eye gravel

The Spears project was designed and constructed by The Land Collective, a design build company operated by Sean Scully and Dustin Welch.  The design concept was a marriage of Japanese dry gardens and Southern Oregon native elements.  The English Tudor architecture of the house paired well with examples of Japanese architecture and worked nicely with the garden style.  The large blank stucco walls supported the sparse expanses of decorative gravel.  Bold rectilinear forms paired with organic shapes fit the architecture and Japanese garden motifs.  Plants native to the surrounding oak woodland were used in dramatic stone arrangements to magnify the sculptural form of species such as manzanita and ceanothus.  Native fescues were clustered in small islands of grass set in a gravel sea.  Efforts were made to bring rugged native elements into the carefully arranged courtyard.  As the design drifted into the woodland, components of the courtyard merged with the surrounding landscape to ground the house in its native setting.

You are currently reading Spears at LandSight.